COMMENTARY FROM THE INVESTMENT COMMITTEE OF CORAL GABLES TRUST COMPANY
Q1 2022 - Navigating the Uncertain Environment
Despite the ongoing Russia-Ukraine conflict and rising interest rates from a more hawkish Federal Reserve, the market has proven to be resilient.  After January and February's negative performance, market participants find themselves asking for justification for the recent market recovery. The biggest reason for March's positive performance is clarity. Although, the wall of worry still exists, there are fewer unknowns today and thus, investors are more confident about navigating the immediate future.  At the beginning of the year, we expressed our concerns over market valuation. As a result of the recent correction, the broad market is cheaper than it was when we entered the year, but it is certainly not inexpensive at these levels. Opportunities exist at the stock selection level which is why we strongly believe in active management looking forward. Currently, the market finds itself in a tug of war between growth vs. value and expensive vs. cheap as we begin a very aggressive rate hike campaign. Investors are relieved that both the S&P 500 and the NASDAQ have reclaimed some of their ground in March, but both had a first quarter result of -4.60% and -9.10% respectively.
While the Russia-Ukraine conflict is fluid, history shows the equity market impact can play out in short order even if the conflict lingers. When examining major geopolitical events over the past sixty years, equity markets often react negatively to the initial news and drawdowns are typically short-lived. The chart below illustrates the last dozen S&P 500 selloffs around geopolitical events with drawdown and recovery periods for each. 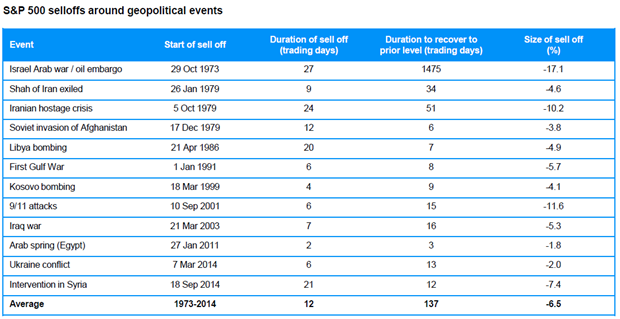 Source: Deutsche Bank, Refinitiv Datastream, Standard & Poorâ€™s, and J.P. Morgan Asset Management.
The geopolitical uncertainty in the wake of the Ukraine situation adds to the market's existing worries about inflation and supply-chain challenges.  These issues are correlated as economic sanctions and restrictions imposed on Russia will only exacerbate inflation. The Consumer Price Index for February increased by 7.90% and the outlook for March and April is expected to be worse as higher energy prices get priced in.  The pandemic and the Russia-Ukraine conflict will likely lead to a roll back in globalization, thus acting as a headwind on inflation over the medium term. However, supply chain normalization and the Federal Reserve's aggressive stance on inflation should reduce inflation in the years ahead. The chart below displays the last 50 years of inflation for both headline CPI and core CPI. 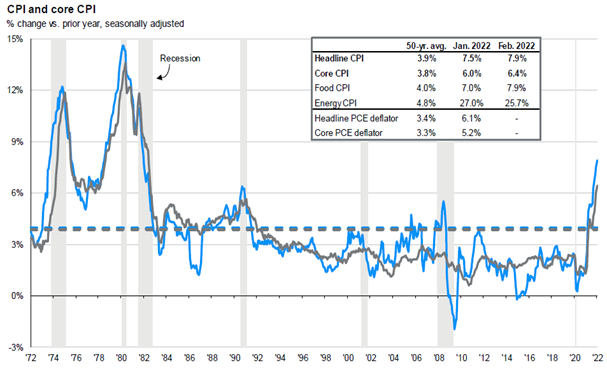 Sources: BLS, FactSet, J.P Morgan Asset Management
As central banks around the world are normalizing their monetary policies, the market will no longer be supported by low interest rates; thus, future gains will largely come from earnings growth. Fortunately, the corporate earnings outlook has been relatively stable despite the backdrop of the Russia-Ukraine conflict and recessionary fears. As we write, earnings season is a couple weeks away and investors anxiously await to hear guidance on corporate America and the health of the consumer. Analysts are projecting earnings growth to remain in the 8-10% range for 2022. The chart below displays the earnings-per-share growth in 2022 for companies around the world prior to the invasion (7.00%) and after the invasion (6.00%). Investors are beginning to price in a more difficult environment following the Ukraine/Russian conflict along with a possible slowdown due to higher interest rates. 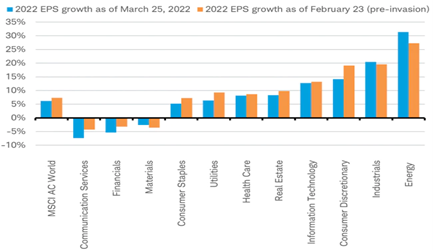 Source: FactSet
On the economic front, the first quarter added 678,000 jobs to the economy, surpassing expectations of 423,000. The labor market continues to tighten which is reflected in the drop of the unemployment rate from 4.00% to 3.80%. Despite the labor market tightening, there is still slack in the labor market with over five million job openings compared to the current number of unemployed workers. We believe the combination of modest GDP growth coupled with favorable demand and supply dynamics, should lead to additional job gains in 2022.
At the March Federal Reserve meeting, the Committee approved its first interest rate increase of a quarter percentage point (0.25%). The Federal Reserve's communication in both their forecasts and in Chairman Powell's comments suggest that they are now willing to take an aggressive stance on controlling inflation. The Federal Reserve signaled that it could raise the key policy rate at least six additional times this year and their summary of economic projections showed the key policy rate topping out at 2.80% at the end of 2023.
As challenging as the bond market has been this year, yields could rise further. The primary reason for the weakness is due to sharp increases in U.S. treasury rates coupled with the effects of inflation. Bonds typically act as a ballast against equity declines as investors rely on the inverse correlation to provide their portfolios with protection. This has not been the case in 2022 as inflation has put upside pressure on interest rates. The short end of the curve has been active with the yield on the 2-year U.S. treasury rate surging from 0.73% to 2.32% at the end of the quarter. The 2-year treasury serves as a benchmark to what the Federal Reserve's actions could be on rate policy. The 10-year treasury bond increased from 1.51% to 2.33% at the end of the quarter.  At quarter end, the difference between the 2-year and 10-year treasury was 1 bps or 0.01%.  Although, the yield curve between the 2-year and 10-year briefly inverted during the ending week of the quarter, it becomes more worrisome if the inversion is persistent and continues over several months. An inverted yield curve is where short-term interest rates are higher than long-term interest rates and the last four U.S. recessions have all had an inverted yield curve as a precursor. The Federal Reserve now finds itself facing the task of navigating the rate hike campaign towards a soft landing without disrupting economic growth. The chart below shows the spread difference between the 10-year and 2-year U.S. treasuries over the last twenty years. The green line represents the average spread difference, which over the last thirty-five years has been around 1.10%. The red circles display the 10-year and 2-year U.S. treasury inversion, and the shaded areas indicate the recessions that followed the inversion.

Bond spreads have widened slightly but do not suggest widespread credit concern.  However, this is worth watching in the months ahead.  Performance of the Bloomberg Barclays Aggregate Bond index finished the quarter -6.00% and foreign bonds were -6.98% on average
Across the pond, the tragic Russia-Ukraine conflict has resulted in a global energy shock. This is dampening economic growth and exacerbating supply-driven inflation with Europe most exposed due to its Russian energy dependence. We see this weighing on consumers and denting growth expectations, especially in Europe. While international equities continue to underperform their domestic counterparts, history suggests that international equities may soon have their day in the sun.  We are well into fourteen years of the current trend of U.S. outperformance and currently international equities find themselves at a thirty-two percent discount to U.S.
THOUGHTS ON ASSET ALLOCATION
There has never been a time in history in which investors were not distracted or influenced by external factors. To begin the new year, investors were faced with a myriad of unknowns from a Russia-Ukraine conflict, inflation at a four-decade high, global supply chains disruptions and a Federal Reserve pivoting to an aggressive hawkish stance.  While there is greater clarity on these issues today, market volatility will persist until these risks get priced in appropriately.  We believe the market's primary concern is inflation and how effective the Federal Reserve can combat it without stalling the economy. If the Federal Reserve's aggressive stance on combating inflation is not effective, we could be in for an extended period of significantly higher interest rates. Essentially, this would be negative for fixed income and equities trading at high valuation multiples. However, it could be positive for value equities, which are trading at market valuations or lower. In addition, within fixed income, shorter duration bonds are paying more yield now than the previous few years which will be a boon to savers. Our Investment Committee in January decided to adjust our equity models towards value while modestly reducing the weight in our growth managers. Corrections are a normal part of investing and the relative calm of last year is the exception to the rule. Staying invested through challenging times is the best approach to meet your long-term goals and objectives.
Listed below is a subset of our equity and fixed income managers that outperformed their stated benchmarks.

*Return are from actual portfolio results. Results may vary. Past performance is no guarantee of future returns.
We look forward to speaking with each of you regarding our views and the performance of your respective portfolios. For additional information or questions please contact Mason Williams, Managing Director & Chief Investment Officer, at 786-497-1214 or Michael Unger, Vice President & Investment Officer, at 786-292-031