Q2 2022 - Staying Cool Amongst Hot Inflation & Recession Fears
The U.S economy and markets struggled in the first half of 2022 as investors were challenged with multi-decade high levels of inflation, aggressive monetary policy tightening by the Federal Reserve, global supply-chain problems and the Russia-Ukraine war upending commodity markets.  The S&P 500 and the technology heavy NASDAQ lost March's reclaimed ground and officially entered a bear market in the second quarter with a -16.11% and -22.27% return, respectively. The S&P 500 experienced its worst first half in fifty-two years with a -19.97% return.  This year has been characterized by a decline in market valuations as equities have adjusted to higher interest rates.  While rising interest rates and a hawkish Federal Reserve explain the decline in valuation, it is not clear why earnings estimates have moved higher in the face of poorer economic data. Most countries have seen earnings estimates climb meaningfully since the start of the year, as displayed in the chart below. 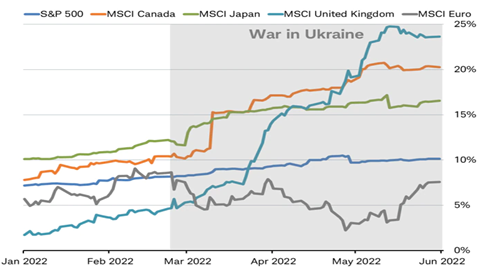 Sources: FactSet, Charles Schwab
Companies have only recently begun lowering earnings expectations in recent weeks. It is becoming increasingly difficult to ignore rising costs and decelerating economic growth that will eventually pressure revenues, earnings, and margins.  On main street,  higher prices and higher borrowing costs will weigh on consumer demand in the coming quarters.  Active investment management is becoming increasingly important as investors search for superior companies that are well suited to sustain margins in a decelerating economy.
On the economic front, the second quarter added 390,000 jobs to the economy, surpassing expectations of 328,000.  The unemployment rate held at 3.60%, which is just above the lowest level since December 1969. However, there are signs of declining momentum in this very tight labor market.  Most notably, the initial unemployment claims have slowly been drifting up, with the four-week moving average climbing from 170,000 per week in early April to 231,000 by late June. By historical standards, the unemployment claims are still a very low number and continuing unemployment claims have maintained a steady downward drift in recent weeks to near record low levels.  We have recently heard reports about hiring freezes and layoffs appearing in some pockets of the economy such as speculative technology.  Time will tell if layoffs reach the broader economy on the back of a more prolonged economic contraction.  While U.S. GDP declined by -1.50% in the first quarter, the jury is out until the second quarter reading to determine if the U.S. is in a textbook recession.  There's plenty of evidence supporting slowing growth from incoming data points like purchasing managers index, durable goods orders, and retail sales. According to a recent University of Michigan consumer sentiment report, consumers appear to be even gloomier now vs. prior economic downturns like the Great Financial Crisis and the early stages of the COVID market downturn.
While we await the second quarter GDP reading, there is no reason to believe if the U.S. falls into a recession that it would be deeper than average.  While the pandemic recession was a unique event, most other recessions involve some cyclical sector of the modern economy, such as capital spending or home building, going from boom to bust.  Except for crypto, none of the traditional sectors are overextended and it is unlikely that we could experience a deep and prolonged contraction.  With U.S. banks passing the latest round of federal reserve stress tests, the financial system is far better capitalized than before the Great Financial Crisis.  The current economic environment resembles the early 1980s, in which inflation was high largely due to price spikes in oil.  The Federal Reserve's extreme measures to combat double-digit inflation by raising interest rates to its highest level ever at 20%, unfortunately, drove the U.S. economy to two back-to-back recessions. Fortunately, the rate of inflation today is nowhere near the 1980s and interest rates will not need to reach those lofty levels to reverse the current inflation trends.
Investors should not fear recessions as they are a normal part of the economic cycle.  Investors may be surprised to learn that markets do not always decline in a recession because a large part of the decline happened in advance.  The following chart indicates that the average decline for the S&P 500 during the past nine recessions is -1.50% while the median decline is -3.40%.  In the two years following a recession, price returns were positive 82% of the time with an average return of +20%. This return pattern proves the markets are forward looking mechanisms and investors should be positioning for a recovery once the economy falls into a recession and investor sentiment is at its lowest.  As Warren Buffet has said about the markets and investing in general: â€œbe fearful when others are greedy and greedy when others are fearful. 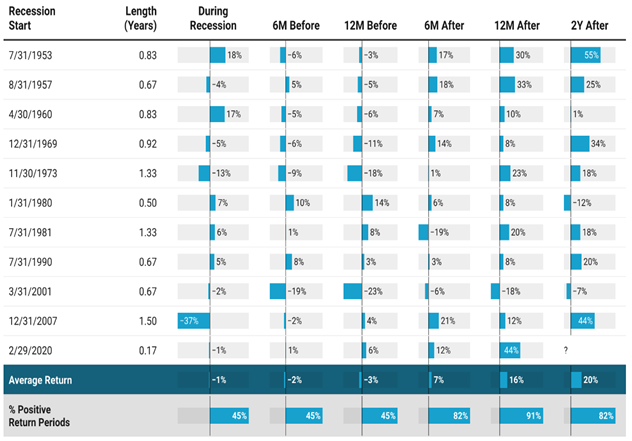 Sources: National Bureau of Economic Research, Bloomberg, YCharts
Within fixed income, the dramatic rise in yields through the first half of the year has led to disappointing returns with many corporate bond investments down more than 10%.  The steep drop in prices was driven by a combination of higher Treasury yields and rising credit spreads, as markets adjusted to hotter inflation readings and hawkish Federal Reserve.  Fixed income, while seen as a traditional safe haven in periods of stress, did not perform as expected. Where yields go from here will likely depend on the inflation outlook and how aggressive the Federal Reserve's response will be.  With June's inflation report displaying a year-over-year rise of 8.60%, this tipped the hand of the Federal Reserve to raise interest rates by 75 bps in June, which was the most aggressive interest rate hike since 1994.  Since the Federal Reserve's first interest rate hike in March, they have increased interest rates three times, taking the fed funds rate from 0% to 1.50% in just four months.  For the remainder of the year, we look for the yield curve to flatten further as the Federal Reserve continues to hike short-term rates.  The 10-year treasury had one of its fastest increases in history, spiking to a high of 3.48%.  We believe the bulk of the hikes are behind us as we are starting to see signs of a slowdown.  It is important to note that after the steep drop in prices, yields on many corporate bond investments are near their highest levels in years creating an opportunity for savers. Investors can take advantage of this opportunity by increasing duration in high-quality bonds to lock in a higher coupon.
Foreign bonds were down -8.92% for the quarter, while the performance of the Barclays Aggregate Bond index fared better for the quarter with a -5.08% return.
On the international front, the clouds around the eurozone outlook continue to darken. The Russia-Ukraine war shows no sign of abating, inflation pressures continue to mount, and the European Central Bank has finally turned hawkish.  The most significant risk is that Russia retaliates to the European Union's embargo of Russian oil exports by cutting gas supplies to Europe with the fall and winter seasons upon us.  If a worst-case scenario is avoided for a reduced energy and natural gas supply to the Euro region, investors would be facing a positive market surprise and sentiment shift.  The European Central Bank turned hawkish by expressing that a 25-basis point rate hike will occur at July's meeting, and they will be winding down its quantitative easing programs.  Given the relative valuation advantage abroad compared to the U.S., international exposure remains an important component within a diversified portfolio.  The MSCI ACWI ex-US index returned -13.73%, the MSCI EAFE index returned -14.32% and the MSCI Emerging Markets returned -11.40% for the second quarter of 2022.  International indices tend to have more value exposure in their construction which led foreign equities to outperform their U.S. counterparts in the second quarter.
THOUGHTS ON ASSET ALLOCATION
The best way to overcome investing fears is to have a plan and approach that is diversified between safety and risk assets and guided by a detailed financial plan.  As we approach our mid-year rebalancing, the Investment Committee is having extensive conversations regarding the positioning of our portfolios for the remainder of the year. We will place particular importance on what we want our allocations to resemble as we face a possible recession and alternatively look for value in asset classes that have sold off creating a positive risk/reward scenario as we look to an eventual recovery.
Inflation is the main concern for the second half of the year and will be the driver of near-term market performance. If inflation begins to subside, this will cascade into greater spending power for consumers; thus, reducing the need for the Federal Reserve to act aggressively to restrain price growth.  However, if inflation were to accelerate from current levels, the Federal Reserve would need to take more aggressive measures and consumers would have less discretionary spending ability, thus leading to a possible recession. While we cannot predict events like these, there are early signs that the inflation rate is peaking. If this is the case and we can avoid a significant decline in growth, this outcome could provide reprieve in stocks after a very difficult first half of the year. The chart below is a composition of contrarian indicators which gauge investor sentiment as a numerical measure of how pessimistic or optimistic they are during various time frames. History shows when these indicators reach one extreme or another, this foreshadows contrary market activity.

Listed below is a subset of our equity and fixed income managers that outperformed their stated benchmarks during the quarter.  We continue to emphasize quality and consistency in all markets and our downside capture philosophy is paramount as we maneuver through these challenging markets.